“The Mharoti Empire stretches eastward from the Dragoncoil Mountains and encompasses nine great provinces ruled by the Morza, True Dragon Rulers who, in order to avoid constant warring between themselves, allow rulership of a lesser Dragonkin Sultan in the constant war against the predminantly human lands adjacent to their own.” 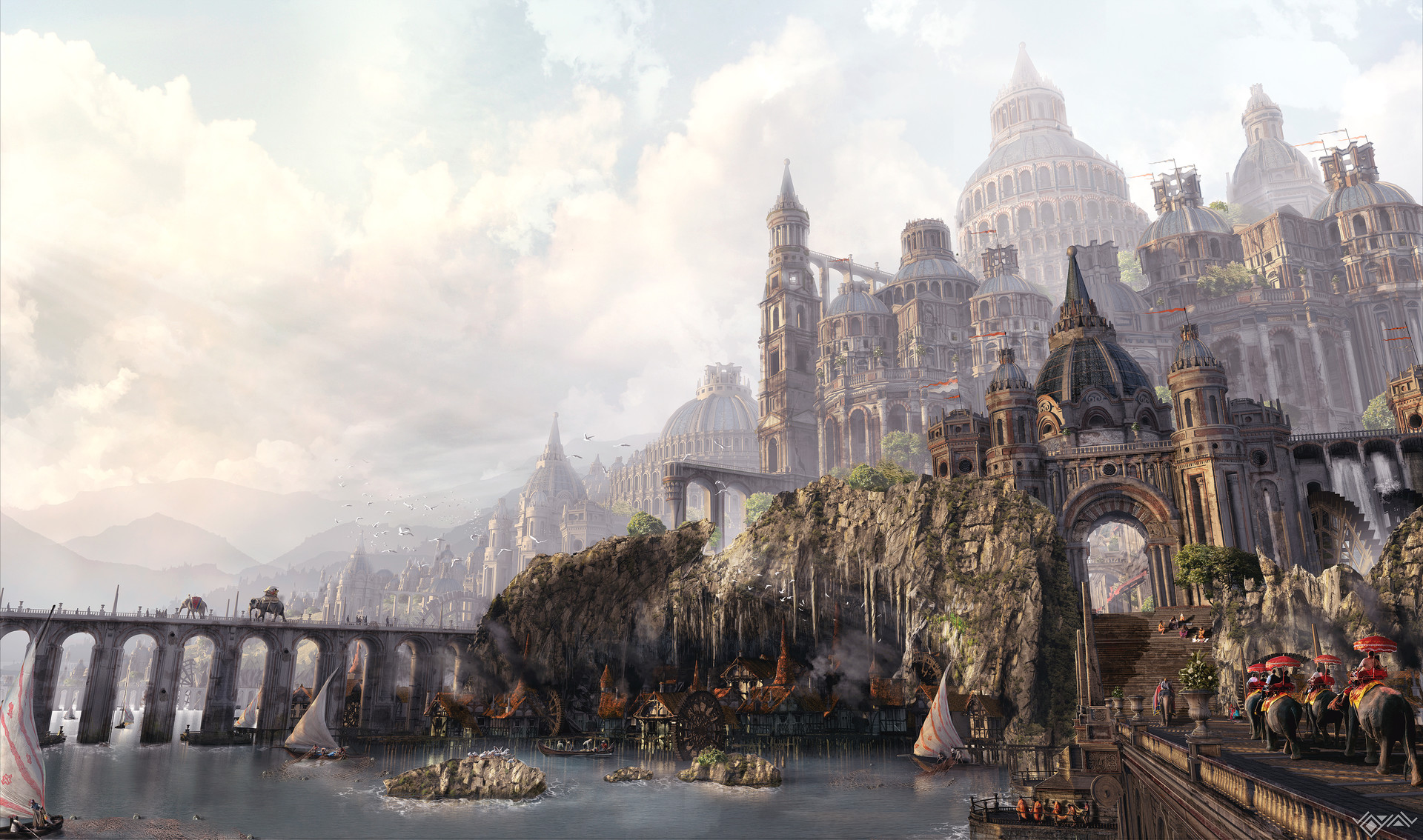 Visit The Golden City of Harkesh…

It was just over 400 years ago that a cunning dragon called Mharot decided he was tired of working so hard to steal golden treasures from humans and dwarves, and then being forced to continually guard those treasures, that he proposed a pact to the neighbouring dragons ruling the great provinces east of the Dragoncoil Mountains. He accepted standing offers from kobold tribes and dragonkin clans to give their whole-hearted allegiance to the dragons in exchange for protection, and established a truce between the great dragon lords – a truce kept alive by the creation of a puppet overlord of dragonborn human descent. This was for many years the Dragon Disciple sorceress Sultana Casmara Azrabahir, but she has been recently deposed by the fierce dragonborn warrior Dread Sultan Ozmir Al-Stragul.

By trusting the lesser Overlord to rule, the great dragon lords, The Morza, are kept from continually warring against themselves, so that annual campaigns can be instigated against their soft skinned adversaries to the North, South, East and West. Many of these are skirmishes, sometimes coastal raids, but occasionally wars occur such as the War of Nuria almost fifty years ago in which the Dragon Empire had to withdraw with heavy losses when the Undead God-Kings of Nuria Natal summoned the Gods themselves to their aid.

More recently, a great battle has been fought against the ancient Duchy of Illyria which has been defeated and renamed Rumela, now the ninth Great Province under direct leadership of a newly risen Morza, Glauvistus the Scourge. The threat of the Empire has never been greater to the nearby duchies and kingdoms of the Seven Cities and other border lands like the Magdar Kingdom, Perunalia, Ishadia and Nuria Natal itself. Anyone living in the Free City of Zobeck would be a fool to think that the threat of war did not extend even further.

The Morza – the nine Great Dragonlords of the Empire:

There were previously Eight Great Provinces, each one ruled by one of the Morza. With the recent victory over the Duchy of Illyria and the establishment of the new province, Rumela, a new member of the Morza has now risen to power to increase the number to nine:

The entire existence of the Empire relies on delicate balance of power politics on several levels. Firstly, there is the Sultan. The position, established by Mharot in the early days to be the only way in which the great provinces ruled by the Morza could work together, is the main adhesive force in an empire that would otherwise fall apart through bickering, mistrust and inter provincial war.

A few years ago, after a massive and crushing defeat to the Ishadians of the South East and the Khandirians of the Far East, in which an entire dragon legion was annihilated in the Battle of Wheeling Angels, the Sultana’s governance was challenged by Dread Sultan Ozmir Al-Stragul in a coup forcing Sultana Azrabahir to flee and seek exile in the Republic of Valera of the Seven Cities.

The Dread Sultan, a cruel and cunning dragonkin warrior took complete control, wiping out his co-conspirators and immediately seizing the reigns in his Palace in Harkesh. Apart from the Morza themselves, he controls titles, laws, judges and land, collecting taxes, distributing bread and tribute and leading the armies that fight for all provinces combined. His dire assassins threaten dragonkin and human satraps alike, with his command of the armies giving him leverage against any individual lord who may feel emboldened enough to try and elevate himself within the strict hierachy.

The other important balance of power constraint that limits the expansion of the Empire is the power and number of the Empire’s enemies on all sides and the resultant drain on resources and supplies. Khandiria to the East is incredibly powerful and war with Khandiria and Ishadia to the south constantly demands much of the finite resources of the Empire. To the North lie the wild Khazzaki and the Rothenian Planes, chaotically touched by the ever scheming Baba Yaga. To the West are the Seven Cities with their large and powerful navies, the lands of Nuria Natal with their divine protection, the God-blessed Duchy of Perunalia, the warlike peoples of Queen Dorytta in the Magdar Kingdom, and all the human and dwarven lands of the Crossroads. Simply put, although ruled by powerful dragons and served by hordes of warlike drakes, the Empire has to contend with a serious issue of stretched resources.

The base for the players will be the trading city of Harkesh outlined in its own section above. However, some of the action may take place in some of the other Great Provinces. For a brief description of some of these, see below: 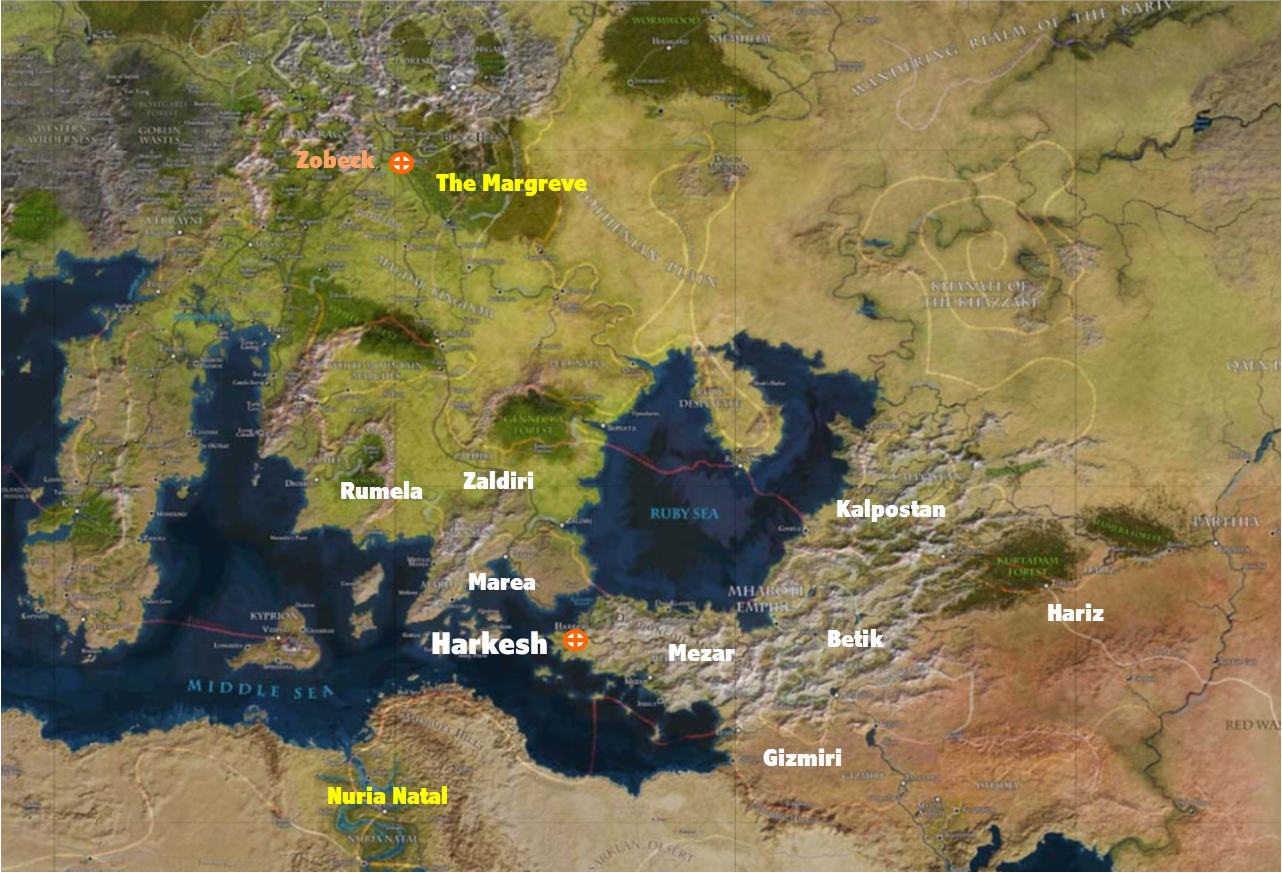 The Empire is surrounded on all sides by a combination of enemies, vassal states and wastelands:

These are the rough working notes for the adventures

Back to Regions of Midgard

Mandala by Lisa Konrad from www.arthouse.org