Sharp and quick to act, Captain Olga is thought to have grown up in the city of Achillon in the province of Marea and the Islands, where the population of Jambuka is relatively high. She is known for her good judgement and concilliatory attitude towards the soft skinned races, but takes no chances and is always fully armed.

Of the three Guard Duty Captains at the Triolan Quater Governor’s Offices, Olga is most probably the one that a soft skinned person “in trouble” would most want to have as judge over their case. Her rulings seem to be a little less severe than the other two captains, and she really only tends to get involved in disputes where murders or sedition may tend to unbalance the status quo.

She is a reknowned dragonkin fighter and has had considerable campaign experience in her earlier years. She speaks and writes fluently in Draconic, Trade Tongue, Triolan and Nurian and has considerable local knowledge of Harkesh and The Seven Kingdoms.

Of the three Captains of The Quarter, she is probably most favoured of Governor Vladimir Potemkin. She gets on well with Captain Boris Yeltsin but is at odds with the overly aggressive methods of Captain Temujin Khitai, with both she and Yeltsin tolerating the young Timarli due to his noble ties. 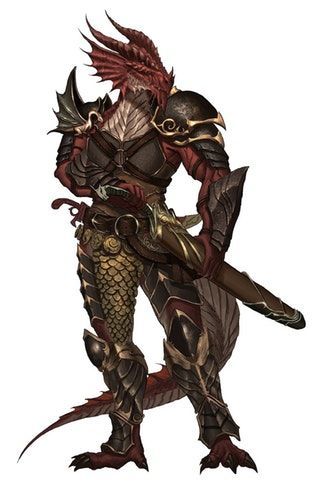