Three deaths, one Breath of Life 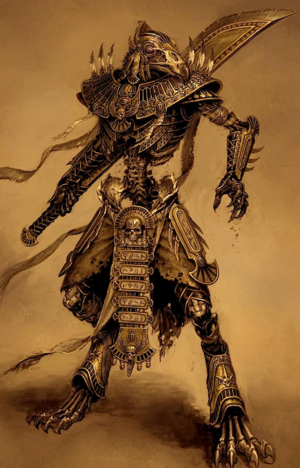 Deep into the Pyramid of Black Sands and in dire need of rest, but discovering the floor of the pit where they stood was actually a slowly moving machine, Arcael and The Oooze elected to rest on the central area of the platforms above. All was going well until, just before the end of their final rest period, four clockwork guardians entered the area, dividing themselves along the various causeways and approaching from all directions with activated Dynastic Auras.

Never before, in the field of humnoid saving throws, have the lives of a party been betrayed by such a host of low rolls. The gods would have wept if they had even noticed. Within moments Karn Gudin and Xavier were hacking lumps out of each other, Arcael and Saabu Theet were finding breathing difficult and spell-casting impossible, and Goran was a new enemy, both silent and invisible.

The party climbed down into the pit, but the Clockwork Guardians followed them. Poor dice rolls also followed them. Arcael finally destroyed the grim Guardians with a heightened fireball, but by that time both Karn Gudin and Xavier were dead, killed by each other, mutilated and butchered by the Guardians, and annihiliated by the DIMENSIONAL ENGINE of the Pyramid of Black Sands.

Escaping into the VAULT OF NIGHTMARE, the group were confronted by an Animate Dream, thirsting for wisdom. Even although help arrived in the form of a dwarven paladin, whisked into the room through the DIMENSION OF DREAMS, it was not enough to prevent the death of Saabu Theet, restored only by the quick thinking and acting Arcael with his Breath of Life spell.

With the creature killed, the party entered the green glowing room that seemingly once held the Emerald Tables of Wisdom. A broken teleportation room suggested many places where the tablets might have been taken, but offered no other clues. However all was not lost, as some of the Divine energy of Thoth yet remained in this room, enough to heal the party and instill a genetic blessing on the Nkosi cleric.

At the “south” end of the room, the party now saw a spiral staircase going down….