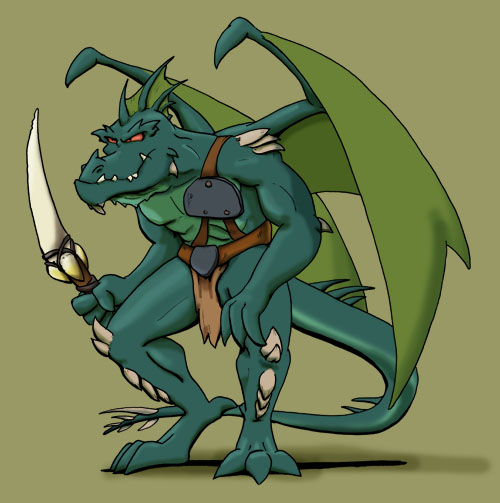 After struggling through the plethora of traps while under goblin Slinger attack from the rooftops in Scaler’s Alley, Arcael eventually got his magic rope out and Iwandornless Walderin (Iron Wall) started pulling himself up the building as the goblin captain rained fire shots on him from above. bartiman-greenbough (now enlarged) held Arenicus on his shoulders so that the mage could use his HAND OF THE APPRENTICE ability to hurl his axe. On the other side of the alley, the candle wick tail of the wizard’s candle drake held two goblins entranced, keeping them out of the fight.

While Saabu Theet healed his comrades below, Goran climbed the rope to deliver a powerful backstab to the goblin leader, now firmly held in Iron Wall’s unflinching embrace. Soon, all goblins were despatched, bar two that fled off over the rooftops.

Electing to continue their quest over the rooftops instead of through the trap infested alley, the group encountered more goblins, but without their height and cover advantage, they were no match for the elite killing sqaud of Arcael and The Oooze and in the end, the flying lizard man, SCALER himself, came out, making a deal with Arcael to let the band through THE CARTWAYS in return for a song. A song I very much look forward to hearing at the next concert!

Sneaking through an empty cartways market, the group came upon four members of the Spyglass Guild. When negotiation failed, the group turned to battle in the form of preferred NON LETHAL damage. When the non lethal element of that assault failed, the group resorted to its usual method of resolving disputes – outright slaughter!

We truly did try, well apart from Goran…

Outright Slaughter should be the bands new name!
The Red “song … hearing at the next concert” seems very ominous.

It has the makings of an “underground hit”.

“Scaler’s place is a place of pain,
be wary stranger, of allys
where danger is the ground’s cold stone
and slaughter comes from the haze,
it’s choking smoke, the flames and hate
of those you would disdain, Goblins.
Who lives returns, with loss, grieving
for an innocence, certainties
given away, their strength unsure.
I do not say this lightly friend,
just stay away… just stay away.”

Excellent! They’ll be singing this in the Zobeck underground for years to come!

Well if that doesn’t have the makings of a Angst metal song then I don’t know what does. Wait, do they know what metal is?

They sure do – DEATH METAL!

Will you tell me where my country lies...