The Book I Read

Thoughts of an Oracle of Aten 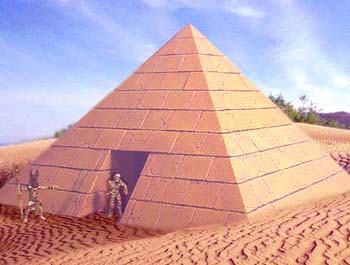 Ali Akbar had been honoured when his current sponsor, Emir Beg Khan Malik of the Qamari had asked him to accompany a group of Northern minstrels on a quest to discover the lost Library of Thoth, but Thoth’s tests had been harsh. Two had died, and the mighty Iwandornless Walderin (Iron Wall) it seemed, would not be returning.

As the recently risen, and usually invisible rogue, Goran descended into the darkness of the final plunging passage, Ali said a quick prayer to ATEN and prepared himself. Deep in the ground, a passage continued into a small room, magically lit. Goran discovered a trap, which was encouraging, but a puzzle awaited them in the underground chamber – a lifeless construct and a cylinder of ectoplasmic goo housing a withered head, its mouth held shut by silver string. He looked to the great sorcerer Arcael, and noticed that he stood at the back of the hall. “A great vantage point” he thought to himself.

After much debate, the glass was smashed and Ali tried to use his healing skills to remove the string. Alas, it set up a trap of loud noise, magic, and the attack of the construct, now revealed as a Posessed Pillar. The druid Bartiman Greenbough changed into massive bear form and engaged with the statue, while the others maneuvered as best they could over the slippery ectoplasmic floor. The cleric of Thoth-Hermes, Saabu Theet tried various options of translation but eventually had to join in as the whole group fought to destroy the statue, its eventual distruction opening up the secret door to the library below.

The library was massive, containing many books of ages past, all cared for by three Axiomites – creatures that looked like elves, and yet seemed somehow more powerful. Saabu went by himself into a secret chamber and returned with a self satisfied smile and an interesting ring on his finger that he was not wearing when he went in, and the axiomites offered writing materials to copy some of the most ancient hieroglyphic magic he had ever seen.

After spending two full days of wondrous study in the Holy Library, the group decided to leave, being escourted by the axiomites to a rising pillar that brought them out into the desert where they had found the temple. He looked around at his companions. Surely, these were mighty adventurers, and not only that – he had also heard they were most excellent musicians to boot. He made a mental note to himself to make sure he was able to attend The Lingering Odour next time they played.

There were some unique Hieroglyph scrolls written by Thoth himself.
Successful detection of the trap and successful disable device were needed to prevent the casting of the Dictum spell, but destruction of the Possessed Pillar was a requirement to open the library door.