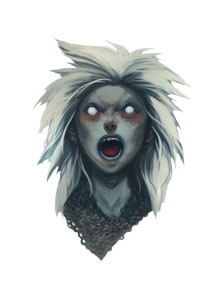 Gryxx Sovvtly, Derro Madcaster, sat chewing a sinewy old mushroom skin from their dwindling supplies. Of his group of six derro, only he was gifted with the “faezpower”. The new area they were in was obviously some kind of humanoid location, but for some reason, strangely quiet. The only person they had seen was the young girl they now had hostage, so Gryxx was slightly puzzled, and of course, totally mad.

At the noise of two sound bursts from the cavern entrance, he knew his scouts had company and he sprung into action. Telf, Sikkur and Sasha lined the north wall, while producing ghost sounds to the south, but he started preparing one of his summoning spells: “Let’s see how these intruders like a nice spider”, he thought.

With his big pale eyes, Gryxx watched the battle unfold. One of the first to enter the fray was a huge cat-like predator, all claws and teeth. He knew that Orfis and Holla would deal with this creature first and was pleased to see, that by their expert rogue tactics, they managed to immobilise him fairly soon.

But this would be a hard fight. A burst of light let Gryxx know that another faezwielder existed, so he shot a magic missile at the creature, while the others, covered the space in darkness and delivered further sound bursts before taking out their poison weapons. The summoned spider fell to both sword and sorcery and Orfis and Holla were surrounded. Orfis fell screaming, and Holla, barely alive, retreated back to the hostage.

Now Gryxx grimaced as he realised how powerful these intruders were. They had grounded the cat, but in a flurry of deadly blades, the surface dwellers pressed Telf, Sikkur and Sasha until Gryxx felt he had to retreat. Falling back, he summoned the two remaining derro to follow him, but he knew his opponents would only replenish themselves and return, so he changed his tactic and threatened the young girl. Surely, their high morals would dictate their actions, he thought. However, he did not count on the big cat getting up. With a single pounce, the beast killed Holla and released the prisoner. It was a fight for the death!

Telf and Sikkur fought bravely but before he could do much, the huge and noisy armoured monstrosity grabbed the Madcaster and squeezed him in a deadly embrace. They wanted some kind of picture, but he knew nothing of this, and therefore nothing that could save his life. He pleaded mercy, but his assailants would not relent. The only comfort the Madcaster had before his death was seeing the valiant escape of Sasha as she managed to run past several of the group and flee into the gloom. Alas, their time near the surface had been so short an adventure….

Sniff I feel almost sorry for the chaotic evil S.O.B. now… not.

LOL! I’m glad to see Stigander has a soft spot…..NOT!

Sasha will have revenge!!

YEAH GIT SUM! Now that was some epic sh*te. Love the gruesome end of Gryxx. Squeezed to death by the Metal Machine. An entity after my own heart.

Iron Wall WILL be pleased!

Thoughts while Crushing the hapless victim. "The soft, giving flesh of mortals. So weak, so frail; Such a delight to end them within the embrace of cold reality and rivulets of warm, glorious blood! (Mind fog passes) What in the blazes of Rava WAS THAT? . The now limp, perforated body topples to the floor.