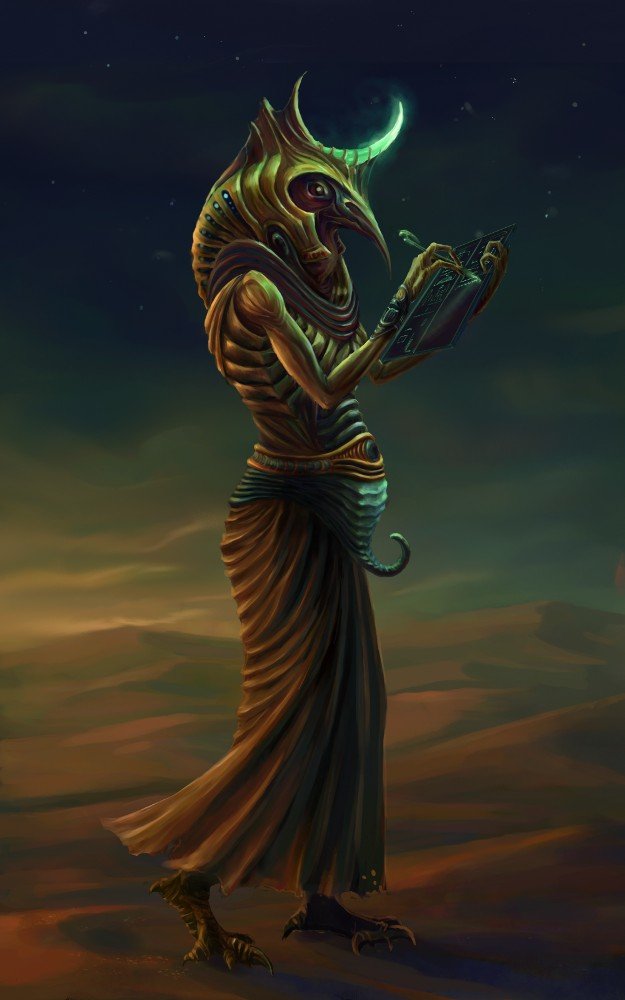 Looking into the great hall Arcael recalled the words of the teacher-priest he questioned: “Thrice-great Thoth-Hermes, in his ibis aspect, is the god of magic; when wearing the celestial disc upon his head-dress he controls the cycles of time and the seasons…”

The door could only be opened upon a specific day, a full moon. This was congruent with his realm of power.

“…He is the weigher of hearts, guide and reckoner of the dead. He can appear as a baboon and in his human forms he can be male or female, aspects of his role as the god of equilibrium and a mediator in disputes between the other gods, ensuring that neither good nor evil are ever triumphant. He is master of all knowledge as well as moral and divine law.”

A guide, and judge, to the dead… Given the local culture’s predilection for undeath we had best be prepared for them. His role as a god of balance also has aspects of mortals knowing ‘their place and limits’. Tales are told of the terrible fate of those that accessed knowledge meant only for the gods, some eternally cursed for their hubris. This is linked to his writing of the ‘moral and divine laws’, interesting.

Well Thoth I am no normal mortal…

Thoth’s hermetic works, in particular deals with the conjuring of spirits and the animation of statues before moving on to the art of imprisoning the souls of demons and angels within statues.

The teacher-priest was unskilled at evasion and Arcael recalled his visible consternation at mention of ‘the Emerald Tablet’. The priest ended the conversation there and then and Arcael was escorted from the library by two guards. Interesting. Knowledge forbidden to outsiders. The N’kosi also mentioned certain lore that he could not copy. We shall see. What price clues to a work of secrets written by Thoth-Hermes himself? Or even lore, possibly not meant for mortals to access?

Arcael smiled, caution and patience would be called for. The corpse at the front entrance was testament to the fate of the unworthy, but Arcael was resolved to explore and be alert to, every opportunity to acquire greater power.

For a short synopsis of the relevant deity see Deities and Powers and scroll down to Thoth-Hermes.