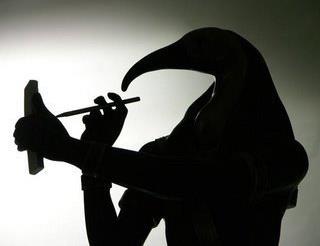 Achmed: Look, I know what I saw and it was a monster! Many eyes, many mouths, blobby and dangerous.
Malik: Just listen to yourself. Monster? Blobby? Are you sure you didn’t stir black salt into your tea instead of sugar?
Achmed: No, ask Emile, he saw it too.
Emile: Sure did! It was a monster alright. The size of an elephant. Three dozen eyes. Hundreds of teeth. Howled like a demon it did.
Malik: Oh, and when was the last time YOU heard a demon howl?
Emile: I heard one before, out near the Necropolis one night.
Malik: Phah! And you say those Northern SLIMES were fighting the thing?
Emile: I think they call themselves OOOZES, not SLIMES…
Malik: Whatever….
Emile: Yes, fighting it.
Achmed: It swallowed their Nkosi priest.
Malik: Dead?
Achmed: Well, that’s just it, you see….
Emile: Thoth-Hermes came down from the sky and blew the monster away.
Malik: Now, you really HAVE been eating the wrong sort of spice. Thoth-Hermes, you say…
Emile: Huge body. Ibis head. Floating in the Air. Thoth-Hermes.
Malik: And what did he say as he blew away this giant monstrosity of teeth and eyes with his tiny Ibis mouth?
Emile: I don’t know what he said, but he brought that Nkosi priest back to life in an instant.
Malik: Then I suppose he just disappeared in a puff of smoke…?
Achmed: No smoke. Thoth-Hermes does not use cheap tricks.
Malik: Of course. Why would he? Well, no matter, I’m still not joining your church. I’ll say a few silent prayers to Aten tonight and ask that he keeps us all safe.

No smoke. Thoth-Hermes does not use cheap tricks.
Awesome log! Love the pic as well.
Perhaps I should make a leaflet for the next performance of Akmed and the Slimes….