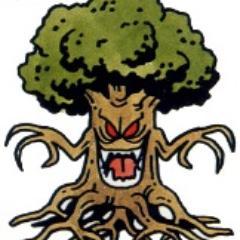 When Alexei Splitleaf of Allain finds himself longing for some rare woodland art by the secretive MARGREVE artist, Woody Banks, he turns to his brave adventurers, Arcael and The Oooze, to take on the journey through the forest. Uniting with their old friend, Balgor, they take THE OLD NORTH ROAD, stopping at RIVENSKY BREWERY and OLD MIKHAIL’S INN on their way to the EYES OF THE FOREST INN, where Banks resides.

Near to the old ruined griffon tower, Bartiman Greenbough suggests a quick detour to taste the sweet waters of Griffon Pond. Indeed, they are just as sweet as he had always heard; however, the nearby bloodtree was not so sweet; an ambush of animated boughs immediately grabbing the druid, Balgor and Truman Click and throwing explosive SIPHORB FRUITS at Arcael and Iwandornless Walderin (Iron Wall), who had the good sense to hang back. Iron Wall ran in to attack but Goran expertly hiding behind the trunk of the great tree itself, managed to escape notice for some time before eventually succumbing to the angry embrace of the tree.

After a few rounds, with Truman Click (fourth most famous Gearforged Oracle in the world), inactive, Balgor unconsious and all the others severely wounded, Arcael made a plea to The Old Margreve by offering up the Key of Veles in return for his party’s life and The Old Margeve listened, magically consuming the precious magical item, while commanding the bloodtree to release its prey.

After drinking the sweet water, the ever vigilant druid Greenbough found the sack of a poor bugbear bandit, pocketed some stolen treasure, and followed a path of footsteps through the forest to the old ruined griffon tower itself. With some unusually loud “sneaking” the group entered the tower and came upon a group of bugbears in the basement. The last remaining bugbear pleaded for his life but found no mercy under the swinging scythe of Balgor. In the deathly silence, they collected their thoughts and prepared to investigate the rest of the tower.

I wonder if the wood from this tree would help Roggie? Of course it may just turn him against the Team and crew.

I’d be happy to bring a few twigs over with Jidian next time he makes an appearance.