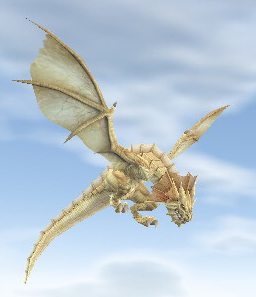 Tharn Shatta-Renn glided effortlessly in the thin air above the Sarklan Desert. An immense distance separated his taut reptilian wings from the hot sand below, but this did nothing to diminish the power of his keen eyesight as he watched his prey travel slowly towards a ship on the banks of the Great Green Nuria. He had underestimated the small group when he had made his first ambush attack on its only scaled member, a lowly dragonkin female that had survived his pounce and resisted his poison. That was a mistake he would not make twice.

The company on the ship were slavers from Nangui by the looks of it, led by a demon with great horns. Troublesome quarry, he thought, tough by nature, tough in flesh. And tricksy. So very tricksy. The rest were humans, one of them a gnoll. A bit sinewy, not to his taste, and the slaves too lean. And what was this coming out of the boat? A mummy? Now, that really WOULD be disgusting. No, it was a succulent human traveller for him – soft skin and a few shiny objects to take home and admire.

Ah, they were fighting! Excellent! Some quick movers, flyers too. The nkosi was on his own but in a field of tentacles. Not a good place to land, Tharn thought. My gosh, what a flurry of magic they display. But one of them seemed to be avoiding the fight and moving into the open desert. Nice garb, some shiny metal and far enough away from the conflict. Ideal!

Tharn’s wingtips flicked slightly to change position before he drew the appendages to his side and dropped like a stone toward the young priest standing alone on a desert dune. Tharn saw the young man’s eyes just before he collided. They looked like they were praying in vain to some unknown god. Those eyes would never see again.

So ends the life of Ali Akbar, Rune Oracle of ATEN.

Poor Ali Akbar! I hope to see a worthy song from Arcael and the Ooze to commemorate the loss…

Oops sorry there is (and apologies for the terrible song reference).