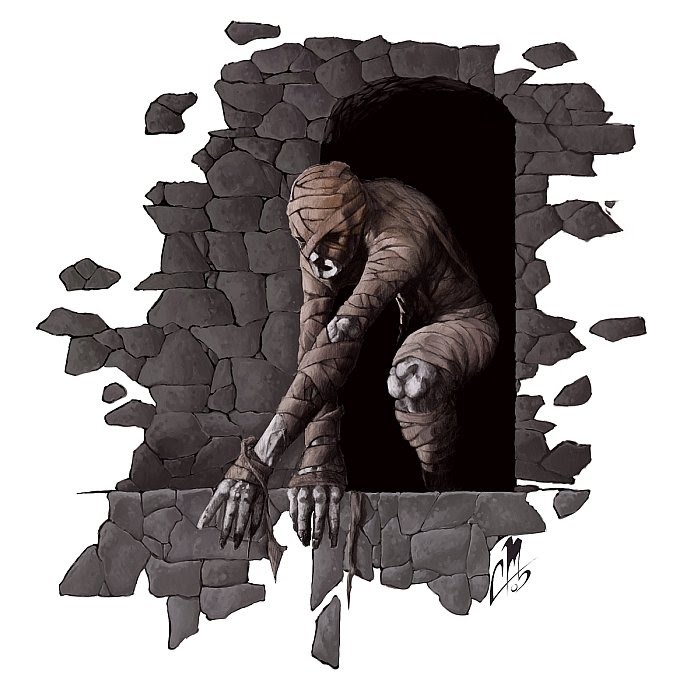 Silent and invisible. Past the first layer of guards and across the Black Sand. Into the village and up to the large room where Xavier was being held. Two guards at the door swiftly executed by Goran, the lock deftly picked, the door quickly opened, and a silent stone thrown inside. But that is not all: an Intnsified Fireball from Arcael is thrown in just for good measure. And as if that were not enough, Karn Gudin lobs in another.

With three out of four elite Descendants of Leng hurt in the double blast, things look grim for our medical experimenters. The Leng Fighter starts a dazzling display, but is downed by Goran instantly. The others are all invisible now. Xavier is on the slab, dilerious. The Leng Rogue drinks a potion and hides while the Leng Witch casts a Barrow Haze to cloud the situation. The Leng Wizard tries to attack Saabu Theet as he enters the room and is grappled and held by the cleric in zwani lion form, his summoned bats locating the mage, the lion-cleric’s sharp claws holding the wizard in a grapple.

Rogue, Fighter, Wizard all destroyed. The Witch escapes but Xavier is freed, and the party move fast now. Silent and invisible again. Into the pyramid entrance. Now rest for an hour. THOTH has told Saabu that the villagers will not enter the pyramid.

The next day, Goran opens two sets of double doors and avoids a dangerous trap before opening a large chamber with rows of carved columns and a sarcophagus. He enters slowly and carefully, suspicious of every shadow. But Xavier has no patience for this approach. Acting alone, he runs into the chamber up to the sarcophagus, disturbing the Mummified Denizen of Leng within. The sarcophagus bursts open with the bright activation of a Symbol of Insanity and Goran is attacked.

The Assault on The Pyramid of Black Sands begins…

You've Seen the Butcher Three deaths, one Breath of Life