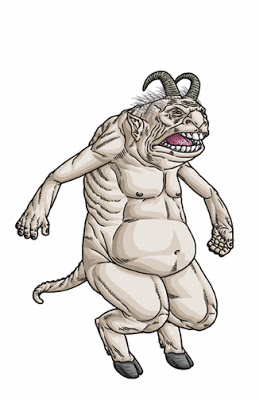 Not many people know about the strange mix of dwarves and humans that inhabit the Black Sands of the Southern Sarklan and their poisoned bloodline, a legacy of genetic manipulation created by the great lizard mage Vaashkennathka and perpetuated through years of isolated procreation. Even fewer know that Vaashkennathka called forth the Denizens of Leng from their otherwordly black sailships, imprisoning them, torturing them and breeding them like wild dogs with his own people.

One by one the subjects of Leng were destroyed by Vaashkennathka, their only legacy the bloodline that ran through some of the villagers. Hundreds of years ago it was, and few remain that remember it now but some say that the last two living captives of Leng rose up against their lizard master. Even now the names of Tsourga and Vuldeng are still celebrated in the village of Black Sands though almost none of the inahbitants remember what they did, how they stopped the lizard king becoming a LICH and how they travelled the far planes of the Dimension of Dreams to find the means to hold the creature in stasis.

Bringing back a great black sailship, they used the materials of the boat to construct what now stands as the slightly crooked Pyramid of Black Sands. Most who pass by this place hurry away from it. Even the villagers stay clear of it, and it is their sacred mission to keep all people away from the place. Most do not know why. Most do not care. They follow the weird religion of their leaders faithfully since they have no other paths to follow. Prohibit entry to the pyramid and perpetuate medical experiments on passers by when the opportunity arises. These are the things that seem normal to most of the villagers.

Perhaps village elders like Kesophoth, Aharamun and Tahnakophet may know more about the rituals performed and the reasons why. Perhaps they have also forgotten, and work their evil magic under the dark shadow of Aposis. Whatever the facts, these are the histories and legends surrounding Xavier as he lies spreadeagled on a cold slab, hands and feet manacled, magically held in a non raging trance as a horned humanoid stands over him with a horrible carving tool, the like of which he has never seen before.

Lucky for him, there was.