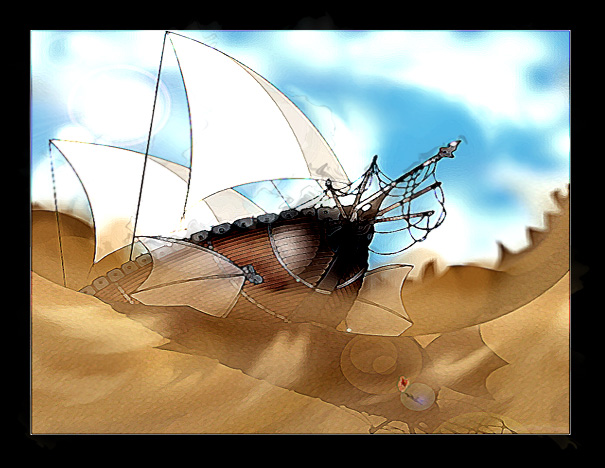 After his successful negotiation with Il Zawbaa Saia (“the bad sandstorm”), Arcael was feeling pretty good with himself. Bartiman Greenbough was doing well too. Iwandornless Walderin (Iron Wall)’s powerful prayer had saved him from the terrible beak of the SALT KRAKEN. Goran was also feeling smugly satisfied with life. He had a powerful magic ring and he was getting closer to being an accepted member of The Sand Corsairs. Even the devout priest, Saabu Theet was jubilant. Cassandra Per-Aten was not only beautiful, but she also commanded respect in the Library, and was finding out some very important information about deeply religious subjects close to his heart.

The cry from the crow’s nest that wakened the sleeping Goran and heralded sight of The Wind’s Mistress seemed to make all those Endure Elements spells worthwhile. As the Sirocco and The Wind’s Mistress rushed toward each other in a whirlwind of sand, they rose into the air another twenty feet above normal and engaged over the sweltering sands.

Stealthily ….and, let’s face it, bravely….Goran sneaked across the deck of the enemy ship and despatched the enlarged Sorcerer before he could even unleash his fire spells. The same could not be said for Arcael, who started depleting enemy numbers with his carefully aimed Fireballs. When Captain Asad al Nar appeared, he quickly crippled Goran with his “improved two weapon fighting slayer’s feint” and manoeuvred himself to engage with Iron Wall. Iron Wall was as a construct of chaos to his faltering enemies and although Captain Asad feared nothing, he could make no serious impact on the heavily armoured fighter priest.

On the other ship, that had earlier been boarded by the pirates, Bartiman now reigned hugely supreme, knocking his enemies off the deck of the ship like bottles off a wall, the huge bear-druid left Arcael hovering in the air delivering precision spells and jumped onto the ship to help Iron Wall defeat the enemy captain. They squeezed and he popped! Iron Wall delivered the killing blow, thus becoming captain with the beautiful bound djinni Nadirah binding herself to his service.

Oooooh, there’s gonna be a lot to discuss!

A run in with a Sarlacc Bruised Dignity