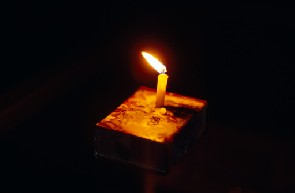 Goran slumped against the wall and slid down until his rear hit the floor. When he had awoken from the darkness his memory had been a blank, but gradually the events of the last ten minutes started to flow unbidden to his mind. The entry to the library had gone with only a minor issue so far. A pit trap that he should have spotted had swallowed him up and left him to the mercy of some damn bugs. I guess managing to be invisible doesn’t help much in these cases. He had spent the next while playing chase with the bugs. Eventually his companions managed to get the roof open again and Iron Wall floated down to his rescue. Ah, Iron Wall….. The swarms must have sensed the fresher air and flew upwards to the groups waiting grasp. He had managed to acquire a set of shiny treasure hunter googles, but that hardly made up for what was to come.

The room had seemed not particularly dangerous at first. A pair of golden statues and some small golden statuettes waited. His first thought had been of their value, not that the fuzzy priest would have allowed it anyway, but it all a seemed insignificant now. Goran had let the others mess about with the statues. Understanding these southern gods wasn’t his forte so he tried his new googles to find a secret door in the corner. He informed the others and paced around, waiting for them to deal with the statues. Some of the smaller ones were moved about and the next thing darkness enveloped the room. It must have been magic or else he would still have been able to see.

The blackness wasn’t only it the room it would seem. It was only now the memory of the next few moments were coming back and even then only in snatches. Flashes across his mind of his hands, darkness stretching from them in vicious claws. Chunks of Iron Walls armour being gouged from his body. The beast had crawled into his body. Used him. Turned him into a weapon to harm his companions. The pieces of Iron Wall lay scattered across the room, blown there by the explosion resulting from the damage he had sustained. Goran’s hand slid across the floor, it brushed against a small gear, slightly singed from the blast. He picked it up and looked at it. It happened to be just the size to slip over a finger. A constant reminder. He looked to the ground and pushed himself up the wall. “I’m sorry my friend”.

Them wicked demons!
Great passage. Thanks!

Chunks of Iron Walls armour being gouged from his body…. great dark picture…

haha, whoops, yeah when you just need that search engine to find that gold!

Aww just read this… The FEELS!
Don’t you worry another bloodthirsty murderer will be with the party at some point!